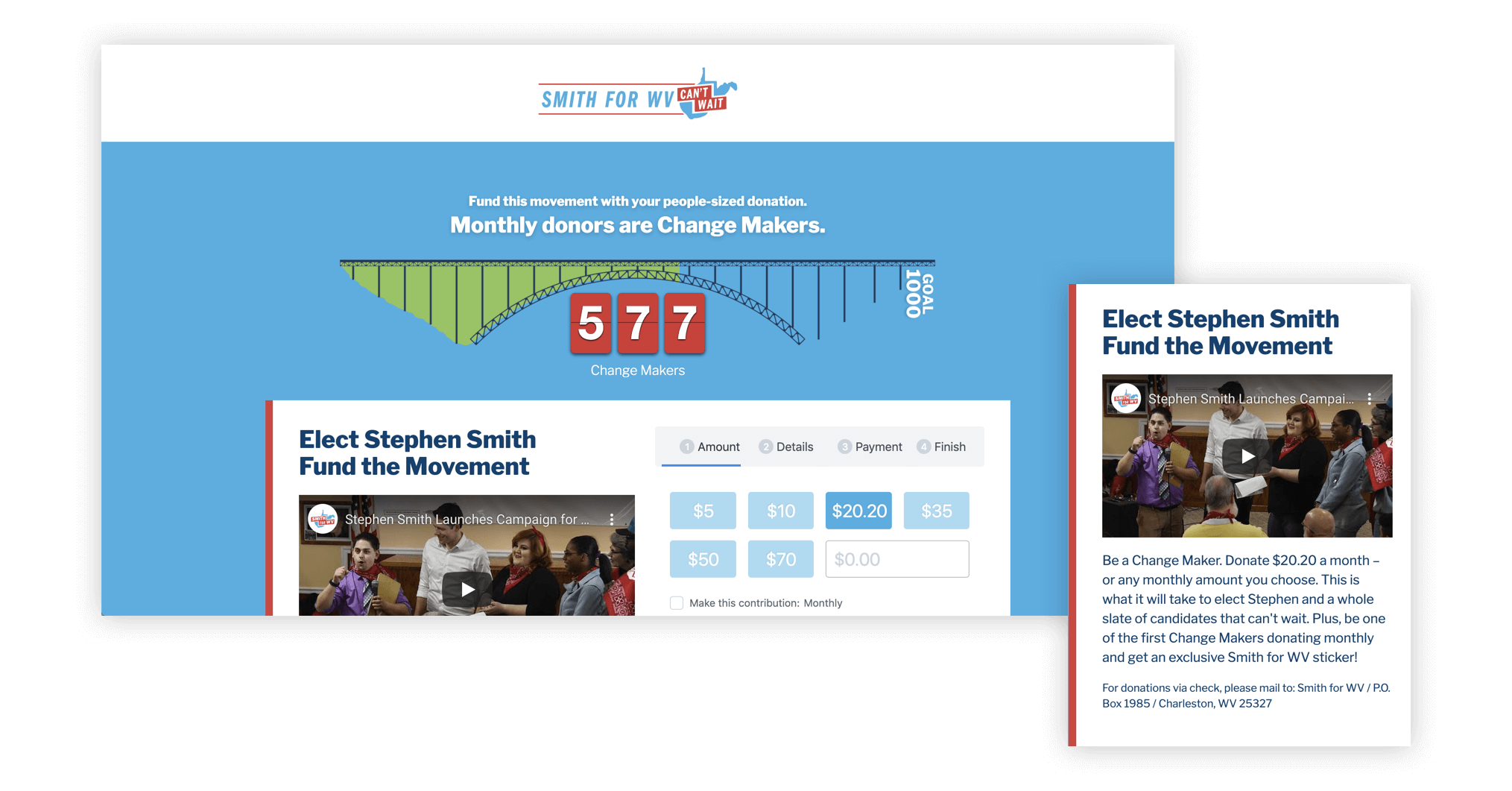 Stephen Smith is a Democratic candidate running for Governor of West Virginia. What’s unique about the Smith for West Virginia campaign is that it’s powered by a truly grassroots effort and refuses to take funding from corporate entities or PACS.

This kind of election campaign is something that West Virginians haven’t seen in a long time. With a platform that focuses on revolutionizing the workforce, fighting racial injustice, providing freedom to people with disabilities and supporting small businesses, Stephen Smith and the West Virginia Can’t Wait team are making waves throughout the state and they came to Oakwood Digital for help in empowering voters to support a better West Virginia.

Grassroots campaigns require a lot of ongoing support from constituents. What will bolster the Smith for West Virginia campaign are small recurring donations – even a few dollars a month will make a huge difference. Stephen Smith and his team wondered how they could encourage people to donate on a regular basis.

This is where Oakwood Digital came into play. Their existing donation web page —powered by NGP VAN, the leading technology provider to Democratic and progressive campaigns and organizations—allowed supporters to donate but it didn’t entice them to go the extra mile. That extra mile is what they need for the gubernatorial elections in November 2020, especially since Stephen is running against a candidate that doesn’t require much outside funding (he’s a billionaire that skips on paying taxes).

Oakwood Digital built new features on top of the campaign’s existing donation page to entice supporters to give recurring donations. Not only would this method prove to be effective in encouraging voters to donate more, but the campaign team wouldn’t be burdened with learning how to use a brand new platform.

Oakwood Digital implemented custom features which helped donors actually feel like they were making a difference:

The initial goal of 300 donors was met within just a few months months. So, they set the goal to 500 – broken again! At present, the goal is 1000 and they’re trending towards surpassing that number as well!

Thanks to the hard work of the team behind Smith for West Virginia, the campaign made history by raising more small donations than all of the 2016 Democratic candidates for Governor combined. With the fully customized, revamped contribution page that Oakwood Digital built, it’s now easier and more enticing for voters to make a donation to the campaign.

Oakwood Digital continues to support Smith for West Virginia by integrating their NGP VAN backend with their Shopify store to create a more seamless connection between the two platforms.

We’re proud that we could create great web technology for a candidate who truly cares about West Virginians and are excited to witness the evolution of the campaign through 2020.

Since the launch of the donation page, several organizations looking to do something similar with their campaigns have reached out to Oakwood. The wonderful thing about our solutions is that they can benefit multiple organizations; their impact reaches far beyond the initial project.